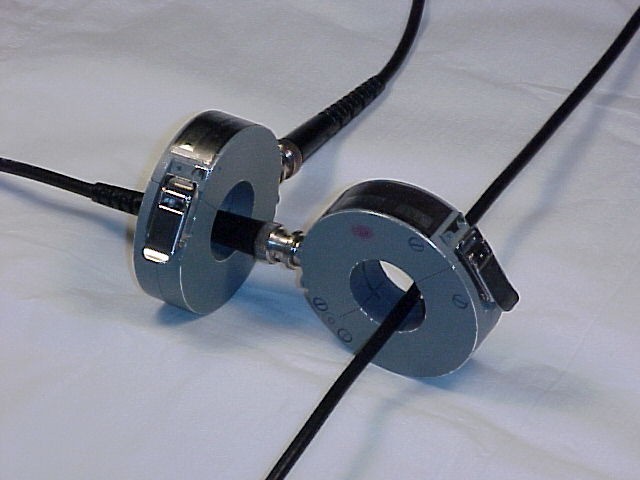 The current probe on the right, in the picture above, is being used to measure the current in the cable passing through it. However, a significant portion of a high frequency current flowing on the cable, especially currents over a few hundred MHz, can couple on to the probe body through the few pF of capacitance between the probe body and the current carrying cable. Note that one pF of capacitance has only 160 Ohms of reactance at 1 GHz.

The result is that the probe cable itself can siphon off and carry away a significant portion of the signal current. This can be a significant effect, especially for ESD currents where the potential of the cable can be thousands of volts with respect to the current probe body. I have observed a measurement situation similar to that above where 30% of the rising edge of an ESD current was conducted away from the cable being measured by the current probe itself. The effect was due to parasitic capacitance between the current probe and the cable. This much current being removed from the cable being measured can affect both the accuracy of the current measurement as well as the response of the equipment, in this case to an ESD current, connected to the cable.

The second probe, on the left, is being used to measure how much current on the main cable is coupled onto the current probe on the right. If the amount of current measured on the probe cable is too high, and 30% is certainly too high, it can be reduced by measures such as loading the probe cable with several ferrite cores of the type used for EMC fixes.

If possible, for measurements of fast transients such as those due to ESD, current probes should be positioned on the measured cable so as to minimize the potential between the cable and the current probe body. This usually means locating the probe near the ground/chassis end of a circuit.