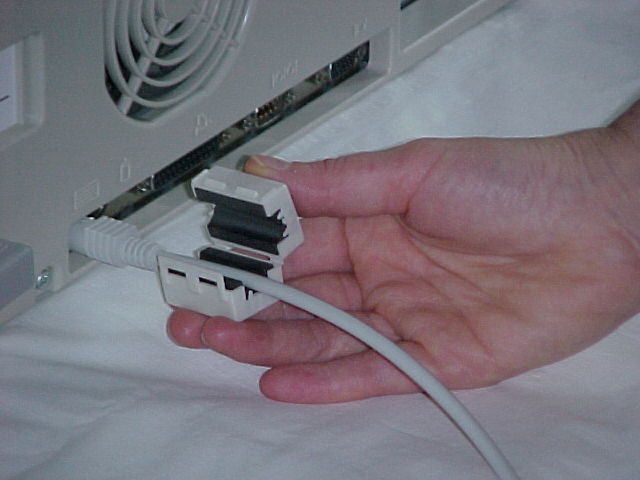 Ferrite cores are often installed on cables to insert a common mode impedance. This is done to reduce common mode currents that cause unwanted emissions and potential failure to meet international  emission regulations like CISPR 22 and FCC Part 15. Many EMC engineers have noticed the emissions at a few frequencies go up with the installation of a ferrite core in some applications. The cores usually used for this purpose are made with a lossy material and therefore the common mode impedance has a significant resistive component. Normally, one would not expect that a resonance is caused by the core tuning the cable because of the resistive part of its common mode impedance.

As it turns out, inserting a resistive common mode impedance on a cable can indeed cause a tuning/resonance effect to occur along with the potential for increased emissions. One way this can happen is illustrated in Figure 1 below.

Figure 1. Two Pieces of Equipment Connected via a Cable

In Figure 1, there are two pieces of equipment under test (EUT) connected by a single cable. We will assume that the equipment enclosures are made of metal and are large enough to be a significant part of a wavelength at the frequencies of interest. For instance, a personal computer enclosure would meet this criteria at 150 MHz.

Now the interesting part. Looking into the cable from EUT 2, the impedance will be low at F2 if the enclosure of EUT 1 presents a low impedance (likely) at the end of the half wavelength cable. As a result of the low impedance presented to EUT 2, current at frequency F2 will flow and radiated emission results.

Looking into the cable from EUT 1, the likely low impedance presented by the enclosure of EUT 2 will be reflected back to EUT 1 as a high impedance because the cable is a quarter of a wavelength at F1. The source of potential emission in EUT 1 cannot drive current into the high impedance at F1 so emissions at F1 will be low.