Figure 1. Measuring the Coupled Signal into a Circuit Path From a Square Unshielded Wire Loop in the Time Domain

Abstract: Shielded loops are often used to minimize electric field (capacitive) coupling. A case is shown where using both unshielded and shielded magnetic loops to inject signals into a path on a circuit board results in an injected signal that is about the same for both loops. Unshielded wire loops are thus shown to be as useful as shielded loops for pulse injection.


Discussion: Figure 1 shows a square unshielded wire loop held next to a path crossing a break in the ground plane of a test board that is used for many experiment on this website. The injected signal from a Fischer Custom Communications TG-EFT pulse generator connected to the loop was measured at the BNC connector on the board (left side) using an oscilloscope for cases where the loop is positioned as shown and for a 180 degree rotation of the loop. A similar test was done using a square shielded loop as shown in Figure 2. The construction of the shielded loop is shown in the May 2008 Technical Tidbit, The Square Shielded Loop - Part 1. Bandwidth of the oscilloscope used was 500 MHz and the TG-EFT was set to generate open circuit pulses of 100 Volts with a risetime of about 2 ns and a pulse duration of about 100 ns. Figure 3 shows the TG-EFT pulse generator.

Figure 2. Coupling a Signal into a Circuit Path Using a Square Shielded Loop
(embedded in a plastic housing for strength) 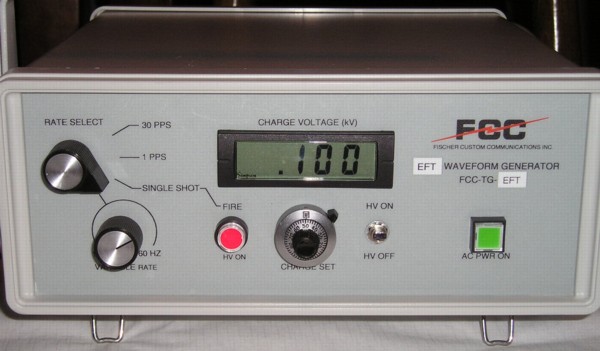 
Figures 4 and 5 show the results as displayed on the oscilloscope using the unshielded loop oriented in the both positions parallel to the path over the break in the ground plane, 180 degrees rotated from each other. Both plots have about the same pulse shape, amplitude, and width. Any change between the plots might be attributable capacitive coupling, however the only difference of any note is that the risetime in Figure 1 is a little faster than in Figure 2. The overall difference in the plots is not significant enough to make much difference when using pulse injection for troubleshooting designs.


The plots in Figures 6 and 7 for the shielded square loop are also very similar as well as having about the same risetime for both plots. The amplitude of the injected pulse is about 20% less because the distance between the center conductor of the semi-rigid coax forming the loop is further from the path on the circuit board due to the diameter of the coax and the thickness of the plastic housing. The slight improvement in matching of risetimes is not significant enough to warrant the extra complication and cost of shielded loops. In addition, if the scope had greater bandwidth, the resonance at about 600 MHz between the shielded loop and the board demonstrated in the August 2008 Technical Tidbit, The Square Shielded Loop - Part 4, Coupling to a PCB would likely cause distortions in the pulses displayed in Figures 6 and 7.

To see a short ~three minute video in mp4 format of using pulse injection to troubleshoot a circuit, click on the picture below. The picture links to the mp4 file on my podcast site http://emcesd-podcast.com. You can get the free VLC media player at http://www.videolan.org if your media player cannot play mp4 files. The free player Quicktime from Apple can also play mp4 files. Clicking on the picture should play the video in your browser or you can right click and select to save the linked content as a file on your computer.

Additional articles on this website related to this topic are:
Additional references:
Equipment used in this Technical Tidbit: If you like the information in this article and others on this website, much more information is available in my courses. Click here to see a listing of upcoming courses on design, measurement, and troubleshooting of chips, circuits, and systems.

Click here for a description of my latest seminar titled (now available online as a WebEx seminar):