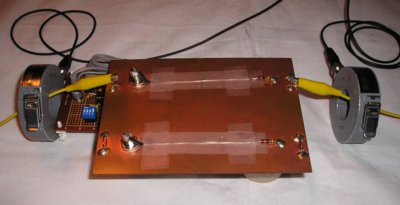 
Abstract: Common mode current measurements are widely used to predict emissions from equipment cables.  Mat Aschenberg and Charles Grasso have written an analysis relating common mode current measurements to radiation comparing three different methods. Their treatment is unique in that it addresses the case where the cable is longer than one half wavelength. The results are presented as a pdf file.

Discussion:  Radiated emissions from a cable are directly related to common mode current flowing on the cable. Figure 1 shows the use of current probes to measure common mode current on cables. About 15 microamps of current flowing at the center of a one half wavelength dipole will result in radiated emissions that come close to international emission limits for class A equipment (industrial as opposed to consumer, or class B). By extension, one can say that a cable that is a significant fraction of a wavelength long may have the same emissions problem if the same current is flowing on the cable.  As a general rule of thumb, if a cable is carrying more than about 15 microamps at a frequency, one can expect that class A (industrial as opposed to consumer) radiated emissions requirements may be exceeded. This is somewhat of an oversimplification, but will serve as an example for this article.

When adjusting a spectrum analyzer, I just put a display line at about 40 dBuV as the level I worry about.

Mat Aschenberg and Charles Grasso, both of Echostar, have performed an accurate analysis with supporting data comparing three different methods of relating common mode current to radiated emissions from a cable. They analyze the case where the cable is longer than a half wavelength, which is often true for many system cables. They have written a short paper with the results of their analysis in pdf format titled "Radiation from Common Mode Currents - Beyond 1 GHz." Click here to view or download the paper. In the paper, Mat and Charles address the relative accuracy of the three methods.

Summary: Common mode current measurements can be used to predict radiated emissions from cables. Such a measurement can avoid unnecessary failures during EMC testing. The linked paper by Mat Aschenberg and Charles Grasso compares three methods for relating common mode current to emissions and presents data to suggest a reasonable method to use.


Other articles on this website related to this topic are:
If you like the information in this article and others on this website, much more information is available in my courses. Click here to see a listing of upcoming courses on design, measurement, and troubleshooting of chips, circuits, and systems.

Available now for private on-site delivery and as a public seminar: my latest single day seminar titled: Failure Analysis and Prevention in Electronic Circuits (Design Troubleshooting for the Lab and Field).