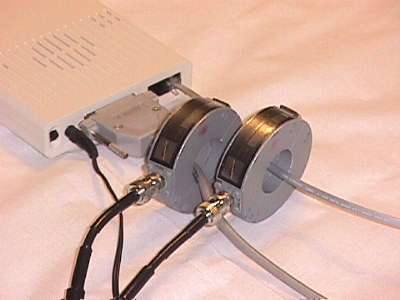 
Discussion: This Technical Tidbit discusses a method of measuring the relative phase of two common mode currents on system cables and how to interpret the results. The results of such a measurement can be useful in EMC emissions troubleshooting as will be seen in the example presented.

Figure 1 shows a pair of matched F-33-1 current probes on two system cables. Matching of the probes is important as the method to be described requires the outputs of the two probes be subtracted to give a result and the normal +/- 2 dB accuracy of the probes is not close enough to yield good results.

A simplified diagram of the test setup is shown in Figure 2. For this simple case, there are only three cables: the power cable and two signal cables.

Suppose that common mode currents are measured on the two signal cables. There are two possibilities for the current directions and these have different mechanisms involving different "fixes" for the problem. Take the case where the current enters on cable 1 from the left in Figure 2, is pushed through the system by a ground potential difference between the two signal cables, and then the current exits on cable 2 to the right, always flowing from left to right. Driven this way, the two signal cables act like a dipole antenna. One possible fix is to address the ground potential difference between the two cables, if one exists. By "beefing up" the ground reference between the two cables, the driving voltage of the dipole will be reduced and so will the common mode current.

An example is shown in Figure 3. I often have a 180 degree subtracting combiner available for other types of measurements so I will use it for this example. The use of a zero degree adding combiner is also possible taking into account that the signals are added instead of subtracted.

Be sure to put 50 Ohm feed-thru terminations (like we used to use on older scopes to get a 50 Ohm input) at the current probes to keep the combiner terminated in 50 Ohms. The combiner output should be connected via 50 Ohm coax cable to the 50 Ohm input of a spectrum analyzer. Adding the 50 Ohm termination to a current probe will decrease its sensitivity in the flat region of frequency response to about 1/2 or about -6 dB while extending the flat region of frequency response to about 1/2 of the former low frequency cutoff. The effects of external resistors on current probe response and impedance is covered in detail in my paper "Current Probes, More Useful Than You Think" delivered at the 1998 IEEE EMC Symposium and in Chapter 8 of my book, High Frequency Measurements and Noise in Electronic Circuits.

At frequency f5, the output went down to a strong null of over 20 dB when the second probe was added. Since the probes are mounted in the same orientation (current entering from the left produces a + output) their outputs would be the same if current flowed from left to right through both probes making cables 1 and 2 act like a dipole. Since the current probe outputs are fed to a 180 degree subtracting combiner, the output will drop as the second probe is added as happened at frequency f5. Under these conditions, the reduction at frequency f5 means that cables 1 and 2 are being driven as a dipole at frequency f5 and a possible fix to try would be to "beef up" the ground reference between the two cables and reduce the voltage driving the dipole.

At frequency f1, the output went up by 6 dB, a factor of two, when the second probe was attached. Given the directions of the probes described and the 180 degree subtracting combiner, the currents on cables 1 and 2 must be flowing away from the equipment under test (EUT) in opposite directions on the two cables. This could mean there is a voltage between the power cable and the signal cables driving a common mode current from the power cable out through the signal cables. If so, the fix would be different than the case at frequency f5.

What about frequency f3. Here the output went down, but only by 4 dB. One possibility is that the current is flowing from left to right from cable 1 to cable 2, but there is some phase shift between the two currents, possibly due to physical separation of the cables' connectors on the system. The higher the frequency and the further the cable connectors are apart, the more likely this is to happen. Another possibility is that some current is also being supplied from the power cord, mixing the two cases described above.

The amplitudes at f4 and f6 did not change. The currents at these frequencies must be flowing on cable 1 but not much on cable 2.

Brain teaser: What does it mean if the output goes up by 3 dB no matter which orientation the second current probe is added to its cable? The answer is at the bottom of this article.


Additional articles on this website related to this topic are:
Additional references:
Brain teaser answer:The two currents are not phase related at all, but come from different sources that happen to be very close in frequency and amplitude so they are displayed as a single line. If the spectrum analyzer span and bandwidth are reduced enough, you will see two distinct lines of the same amplitude at slightly different frequencies. The second line will appear when the second current probe is added. If the amplitude of the single line (wide span and bandwidth) goes up 3 dB when the second current probe is added, then both common mode currents are about the same amplitude. If the added amplitude from the second current probe is less than three dB or more than three dB, then the amplitude of the common mode currents are not equal in that frequency band.

If you like the information in this article and others on this website, much more information is available in my courses. Click here to see a listing of upcoming courses on design, measurement, and troubleshooting of chips, circuits, and systems.