Discussion: Figure 1 shows two probe tips of a passive differential probe connected to the same metal sheet as used in the November 2006 Technical Tidbit, Measuring Signals in the Presence of Severe EMI - Part 1, How Not to Do It. The metal sheet is about 40 cm by 30 cm and is meant to simulate the ground plane of a large circuit board that a probe might be connected to. In the November article, the data presented showed that either single ended scope probes or using two separate probes and channel subtraction in the scope does not work well if severe EMI is present.

A true differential measurement holds the promise of rejecting EMI, but modern active differential probes can only withstand a common mode voltage of a few Volts. The prototype passive differential probe in Figure 1 is made from passive linear components and as such does not have the low common mode voltage range of high bandwidth (above one GHz) active probes. Click here for a description (~450kB pdf file) of the particular probe used in this experiment. Figure 2 shows a picture of the complete probe. 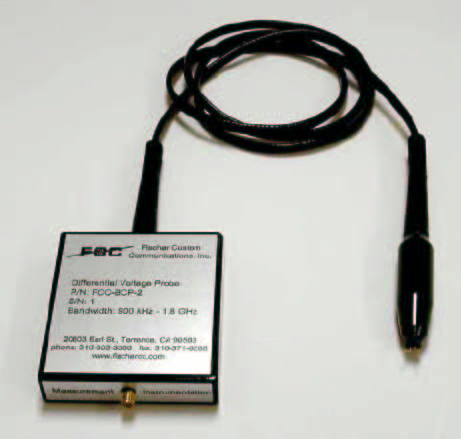 I call shorting the two probe tips in Figure 1 a "Null Experiment," as the result should be zero. To the extent it is not, that is the noise floor of the measurement. Figure 3 shows just one probe tip touching the metal plate. This arrangement gives an estimate of the common mode voltage the probe is subjected to. To get a more accurate reading of the common mode voltage, the floating tip could be connected to the probe metal shell that is itself connected to the probes cable shield.

Figure 3. Measurement of Common Mode Signal due to ESD

Figure 4 shows the result of the probe having just one tip touching the metal sheet, as in Figure 3, while a contact discharge of an ESD simulator to its own ground lead was made at 1 kV about a meter away from the probe. The trace registers about +20 volts peak and slightly more than that in the negative direction. A fast component of the signal at the start of the ESD event shows about  +14/-10 volt peaks. The actual start of the ESD waveform is the first large positive peak of about +14 Volts. The small noise before the first peak is direct EMI from the ESD simulator radiating directly into the scope vertical amplifiers. The ESD signal is delayed by the difference between the air path to the scope and the probe delay including delay in cabling, about 16 nanoseconds in this case.


Figure 5 shows the probe output with both pins touching the metal sheet, as shown in Figure 1, under the same ESD conditions that generated Figure 4. The start of the ESD event is marked and corresponds to the +14/-10 Volt peaks that started the ESD waveform in Figure 4. There is clearly a significant amount of common mode rejection present. A significant portion of the signal showing in Figure 5 is due to pickup in the small loop formed by the probe tips. The probe common mode rejection on its own would result in a somewhat smaller amplitude in Figure 5. As it is, the remnant of the ESD signal is barely above the EMI level shown by the scope itself. Keep in mind the contact discharge was only about a meter from the scope and metal sheet.


If the shield of the differential probe cable is fastened 360 degrees to the equipment chassis (if available) as the cable enters an equipment enclosure, the common mode interference can be significantly reduced from the small levels of Figure 5. I have  made measurements with less than 100 millivolts of measurement noise in the presence of a few kV of ESD using passive differential techniques.

A lower frequency version of a passive differential probe useful to hundreds of MHz is described in my November 1994 article in the IEEE Circuits and Devices Magazine (~3.2 MB pdf file). A probe of this design as well as the higher frequency probe used in this article are available from Fischer Custom Communications.

Summary: Passive differential techniques can be used to make voltage measurements in electronic equipment subjected to severe EMI where active differential probes and single ended probes may not work. With careful design of a measurement setup, measurement noise due to EMI can be reduced to the point where logic signals may be measured in the face of severe EMI such  as ESD.