Figure 1. Test Setup With Mobile Phone in Proximity to a Test Board

Abstract: Cases of circuit failures caused by mobile, or cell, phones are starting to be reported. Electromagnetic Interference (EMI) from mobile phones has been shown to produce hard and soft failures in circuits. Data is presented to show the possible amplitude of EMI induced into a common printed wiring board layout feature. The induced signal is of sufficient amplitude to corrupt signals and in some cases cause hard failures.

Discussion: Figure 1 shows the test setup used. A mobile phone is placed on top of a test board, directly over a path that crosses a ground plane break, an undesirable layout feature (see links about this at the bottom of this page). The data was taken during an active phone call.

The test board was constructed as shown in Figure 2, and has been used in several Technical Tidbit articles on this website. The signal paths on the board are formed from 24 AWG bare wires taped to an insulating layer of tape over the board surface. Each path runs from a BNC connector to a 47 Ohm termination. One path stays over solid ground while the other crosses a 5 cm ground plane break. Only the latter was used for this test. 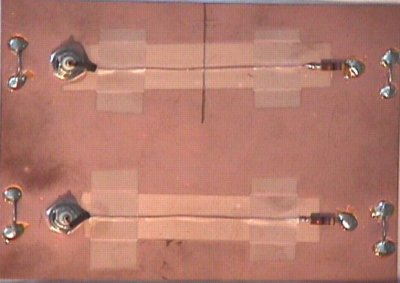 Figure 2. Test Board Used in Experiment

One cannot usually control the power level (~600 mW maximum) or frequency (~900 MHz or ~1800 MHz) of a mobile phone without special equipment as those parameters are set by the mobile network base station the phone is connected to. In this case, the phone was operating in the US ~900 MHz band. The indicated signal strength was low (two of five bars) so the phone should have been near, but not necessarily at, its maximum power.

Figure 3 shows a side view of the test setup. The phone was placed over the path crossing the ground break so as to maximize the EMI generated in the path. Remember Murphy's Law! If the phone protective cover had been removed to allow closer spacing to the board, the induced EMI would have been larger than that observed.

Figure 3. Side View of Test Setup


Figure 4 shows the mobile phone next to the board to get a clear view of both the phone and board.

Figure 4. Mobile Phone and Test Board


Figure 5 shows the resulting scope plot. The period of the sine wave was a little over one nanosecond with a peak amplitude of over two Volts!  An amplitude of two Volts peak into the 50 Ohm termination in the scope is certainly enough to cause effects on real circuits. There is about 40 mW of power delivered to the scope and also to the 47 Ohm termination, a total of about 80 mW. This is a significant fraction of the phone's transmitting power.


Summary: Mobile, or cell, phones have been causing some interesting problems lately.  Significant EMI was shown to be induced in a circuit board very close to the phone. The ubiquitous mobile phone is yet another reason engineers have to be careful when designing today's products.

Additional articles on this website related to this topic is: If you like the information in this article and others on this website, much more information is available in my courses. Click here to see a listing of upcoming courses on design, measurement, and troubleshooting of chips, circuits, and systems.